Despite numerous geopolitical threats (Eurozone elections, tensions between the US and China, North Korea, etc.), worries about the demise of the so-called “Trump trade” and shares being overbought and due for a correction at the start of the year, share markets have proved to be remarkably resilient with only a minor pull back into their recent lows. This despite a more significant fall back in bond yields. Partly this is because the geopolitical threats have not proven to be major problems (at least so far) and Trump remains focussed on his pro-business policy agenda (he has already embarked on deregulation and his tax reform proposals – while lacking in details – indicate that tax reform remains a key objective). More fundamentally though, markets have been underpinned by an improvement in global growth. This is likely to continue. 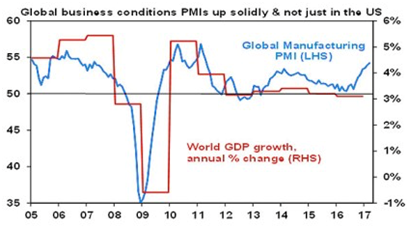 This is the case for manufacturing and services sectors and for advanced and emerging countries. This generally points to stronger growth ahead. Believe it or not the Eurozone currently looks to be the star performer on this front. 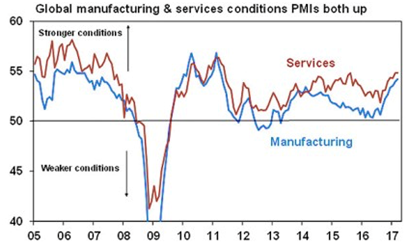 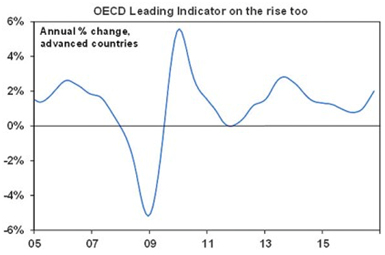 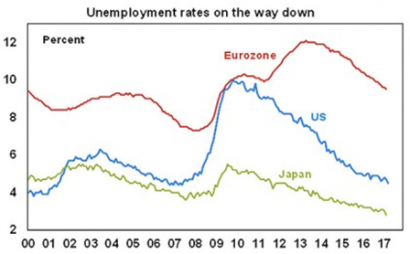 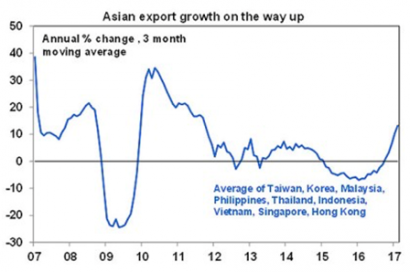 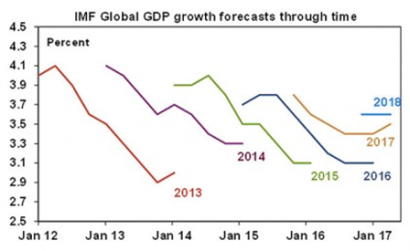 Of course, there is one qualification to all these positive signs (there is always something!) and that is that the US economy looks to have seen a soft start to the year as measured by GDP growth. However, March quarters in the US seem to regularly come in on the soft side initially only to get revised up later and be followed by a bounce back in growth suggesting a seasonal adjustment problem. US unemployment claims running around their lowest since the early 1970s – no mean feat given that the US economy and population are much bigger today – tell us that the US economy remains strong despite a soft March quarter.

So why the turn for the better in global growth?

There are a bunch of factors driving healthier global growth including:

The pick-up in global growth is not so strong as to tell us that we are near the peak of the cycle. Spare capacity remains in labour markets, factories are still not running at full capacity, wages growth remains relatively weak (albeit it’s trending up a bit in the US) and core inflation remains low (just 0.7% year on year in the Eurozone, 0.1% in Japan, 1.8% in the US and 2.3% in China). Out of interest the US Leading Economic Indicator has only just surpassed its pre GFC high and historically it’s then taken six years on average for the next recession to start.

In other words we are a long way from boom times that then give way to a bust. Nevertheless, the implications of the healthier global economy are likely to be:

For Australia, the stronger global growth back drop is a positive in supporting export demand and confidence which in turn should help support Australian economic growth pick up towards 3%. Which in turn adds to confidence that the official cash rate has bottomed. However, with downside risks to growth remaining as mining investment is still falling, underemployment remaining very high, wages growth still ultra-weak, the $A remaining relatively strong and core inflation remaining below target we remain of the view that an RBA rate hike is unlikely until the second half of 2018.